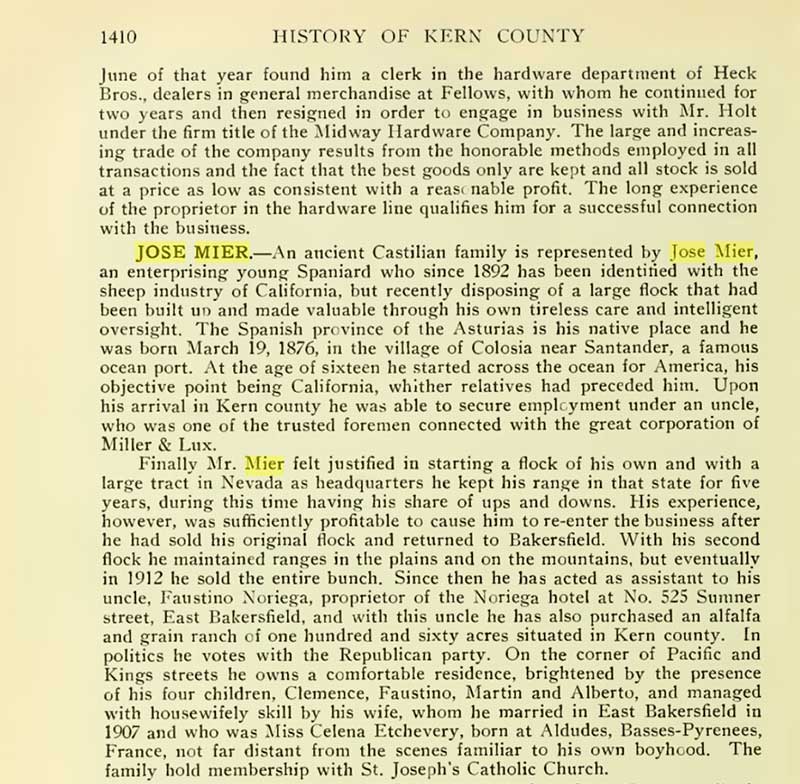 As I’ve said several times previously, I started my Jose Mier search to find other Jose Miers around the world. My search has taken on a life of its own and led me to places I never would have found otherwise.

In the past I would have been forced to dig through dusty mountains of archives in who knows what library in who knows where. Thanks to the Internet, a lot of those dusty old archives have made their way onto the web. That’s what happened recently.

My Jose Mier search on Google returned a new result that I hadn’t come across before. Perhaps because it was located further down in the search results. However, as I continue my research I’m going deeper and deeper into the results.

In this case I happened upon a result for the history of Kern County. One of the notable residents at the time was one Jose Mier. The result was a link to an old volume on Google Books entitled “History of Kern County, California” written by Wallace Morgan and published in 1914.

If it weren’t already evident, Kern is one of California’s 58 counties and is situated just north of Los Angeles County. Bakersfield is located here. Since I am in the Los Angeles area, listings that have to do with California are of special interest to me.

“Jose Mier—An ancient Castilian Family is represented by Jose Mier, an enterprising young Spaniard who since 1892 has been identified with the sheep industry in California.”

“The Spanish province of the Asturias is he native place and he was born March 19, 1876, in the village of Colosia near Santander, a famous ocean port.”

This revelation was astounding to me. After only a cursory look on the Internet for my namesakes and determining that the Mier name hails from Santander, here was more proof of that, written over a century ago.

In this case, this particular Jose Mier came to California directly from Spain and not by way of Mexico and the Nuevo Santander province. Regardless it just serves to bolster my theory of the spread of this name to the New World.