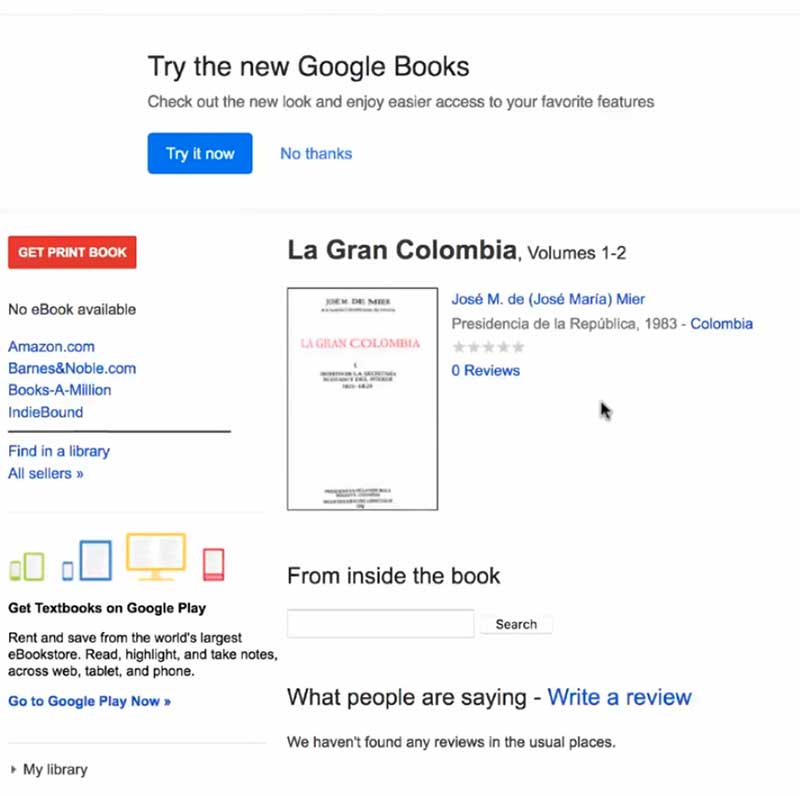 My latest—the 20th—Jose Mier is an author. That’s a first for jose-mier.com. I have recorded many others who share my name but until now no one who has written a book (or multiple books for that matter).

Jose M. de Mier is this author’s name and his work “La Gran Colombia” was penned in 1983. It is a history—written in Spanish—of that part of South American which eventually became Ecuador, Venezuela and Colombia. Panama would become its own nation later after splitting from Colombia.

This find was once more on Google Books. I find Google Books to be an excellent source of (if not information) at least a repository of names. The information on this Jose Mier, however, is limited and not even the book itself is available to read on Google Books. Since it was published in 1983, the copyright would still be in place.

Despite all that I am excited to find yet one more Jose that I can add to my list which already contains artists, musicians, doctors and others from all walks of life. Oddly enough I have not yet found another Jose living close to my region of Los Angeles, but my work goes on.

You may also note that this Jose de Mier shares the de prefix with others on my list and is a remnant of the titles given to Spanish nobility. Some have kept the “de” while other families let it lapse and use only the Mier surname. For my purposes I include either variation on my website.

This Jose has written some other books as well and a search for his name (and my name, but the way) will bring up the short list of his works on Google Books.

For those interested in South American history during the early 18th Century you may want to check out this Jose’s work. I’m certain Simon Bolivar will play a major role in the history as he was responsible for the independence of several South American countries. In fact Venezuela’s currency is the “bolivar.”