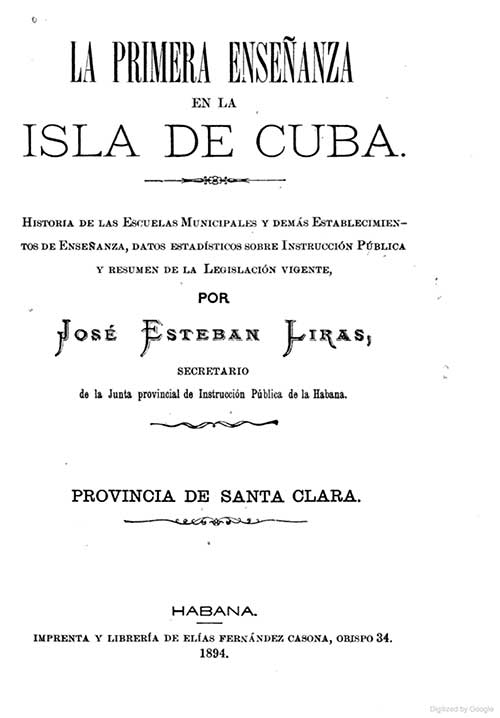 Use of Google Books

I took my own advice and used one of the Google tools I listed in my previous Jose-Mier.com post. I decided to go into Google Books directly and I wasn’t disappointed. There’s a wealth of information to be found. Thanks to Google every name, word and punctuation mark in thousands of old tomes has been indexed and is just waiting for a search like mine for any Jose Mier reference I can find.

There’s something about searching through old books. And while not exactly the same as trudging through the dusty leaves of a careworn book in some reference library, looking at the typeface of these older books is a sort of adventure. I almost feel like I’m in some Robert Louis Stevenson book and following the instructions on some yellowing treasure map.

My latest find (number 19) was found in a book on Cuban elementary schools entitled “La Primera Ensenanza en la Isla de Cuba.” It was written in 1894 by Jose Estaban Liras in Havana, secretary of the public instruction committee of Havana. My particular Jose appears on page 85 and he was the director of the St. Francis of Assisi school circa 1875 and he’s listed in the book as Don Jose Mier. This is my first Cuban Jose as well as one from an earlier time period.

It does shed some light on things in Cuba at the time given that many (if not most) of the school names are saints names which means they were parochial schools run by the Catholic Church. It gives insight into the culture of Cuba just a scant 60 years or so prior to the Cuban revolution when the Church held sway over the majority of the population.

No further information on this Mier is given—that would be the subject of additional research were I to dig deeper, but I’m currently satisfied in merely finding a reference to the name and place. By the way, as the book’s flyleaf tells us the research that Sr. Liras did on Cuban schools was performed in the Santa Clara Province.

I may never know any more about this Don Jose Mier and he would have had no idea that his twenty-first century namesake would be writing a blog article about him in the year 2020 but that’s what makes my search fascinating and rewarding.