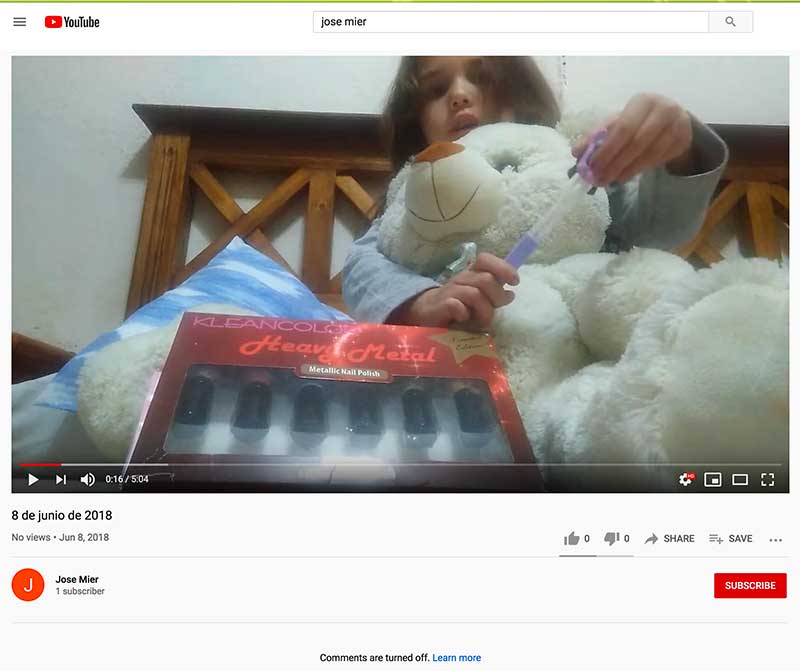 So another YouTube user named Jose Mier is found.   Like previous Jose Miers who choose to upload videos to YouTube, this one doesn’t have much information. I still want to add him to my list, purely because he has the same name has me and I am collecting everybody with that name. In the absence of any real information about this guy I kind of like to imagine with this person’s story is.

First let’s start with the videos themselves. These videos seem to be of someone’s daughter–most likely Jose Mier —and they’re all taken on or around the same date in 2018. The girl looks to be about four or five years old and the videos are all of her playing with her toys. One clue as to geography is that the girl is speaking Spanish so I can narrow it down to perhaps Central or South America. I’m going to go out on a limb and just go with Mexico. I can almost say with certainty that this Jose is thousands of miles from me in Sun Valley, CA (although with all the Latinos in the United States who speak Spanish at home I could be way off!).

One of the videos, the one which I will include on this page, actually had zero views which is odd because I would think that this Jose Mier would want to watch the video that he just posted. Regardless all the videos look to me like a labor of love in that the father of this girl took some videos and put them on YouTube so that he could show her and she could enjoy watching herself.

So from all the information I have I can assume that the person who took these videos is the father, his name is Jose Mier and he lives in Mexico. Since this is a young girl, his daughter, I can assume that this man is probably in his late 20s or early 30s and that he has a lot of love for his child. Other than that the only thing I know is that he joined YouTube in 2018. That’s the date of these videos and it looks like he merely joined it to upload them and show them to his daughter.

As I said, the information about this particular person is almost nonexistent but I filling the gaps with my own imagination. It’s one more Jose Mier I can add to my list.

← Unknown Jose Mier From Mexico or US A Jose Mier Who Loves Beauty →
%d bloggers like this: