The Most Disturbing José Mier Yet

I recently did another search on Google books for José Mier. What I found was a little surprising. I usually find just snippets of information about various José Miers and sometimes more like Jose Mier Noriega, but they are for the most part little glimpses into regular life and nothing criminal—until now. The book is entitled what is Jurisprudencia Criminal and was published in 1908. It is a record of the criminal courts in Spain at that time.

The listing I found in this book for José Mier was for one José Mier Fanjul and apparently in 1908 in October he was appealing his sentence to the Superior Court in Madrid. The sentence was for the crime of homicide. This was a little surprising, I have never come across anything in my searches that had anything criminal or illegal about it. Of course my Spanish is not that good even though I have a Spanish surname so I had to use Google translate to see exactly what was being recorded in this book and found out that this particular man was trying to appeal his sentence of the court had imposed but his appeal was rejected. I am going to include my Google translation billo see you can read the English version for yourself. It’s not perfect. Translate is not always 100% correct. But you get the gist of what is being written here.

Homocide Judgment declaring that there is no place for the appeal filed by Jose Mier Fanjul against the pronunciation for the Absence of Oviedo. In its recitals it is established: That according to the reiterated doctrine of the Superior Court, the existence of two mitigating circumstances is not enough for rule 5 of article 82 of the penal code, but rather that they are highly qualified, which must be inferred from the proven facts, or in his case, of the affirmations of the truthful: in the town and court of Madrid, on April 12, 1907, in the appeal for violation of the law before us, filed by Jose Mier Fanjul against a sentence pronounced by the Provincial Court of Oviedo, in a case instructed to the same in the capital court for homocide

I don’t know if should actually welcome this Jose to my list but I do add him as number 27. 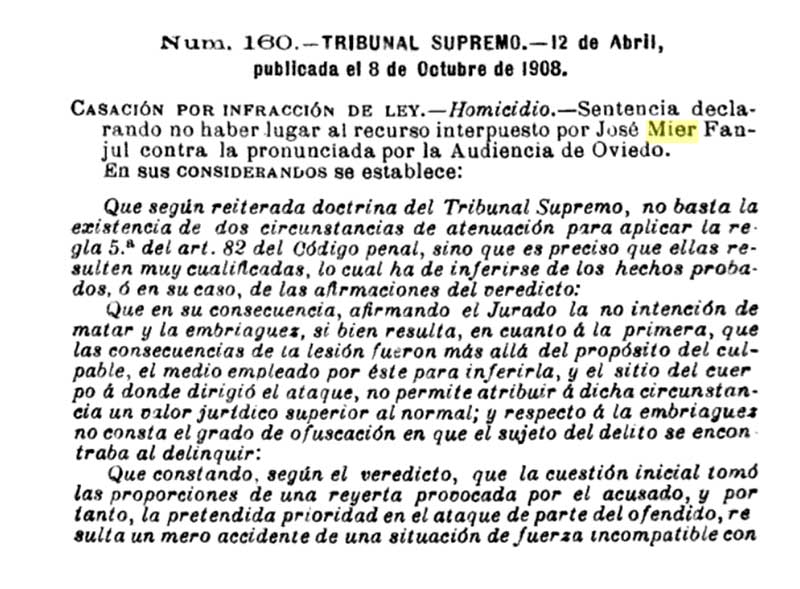