Young Jose Mier from Uruguay - Jose Mier Around the World 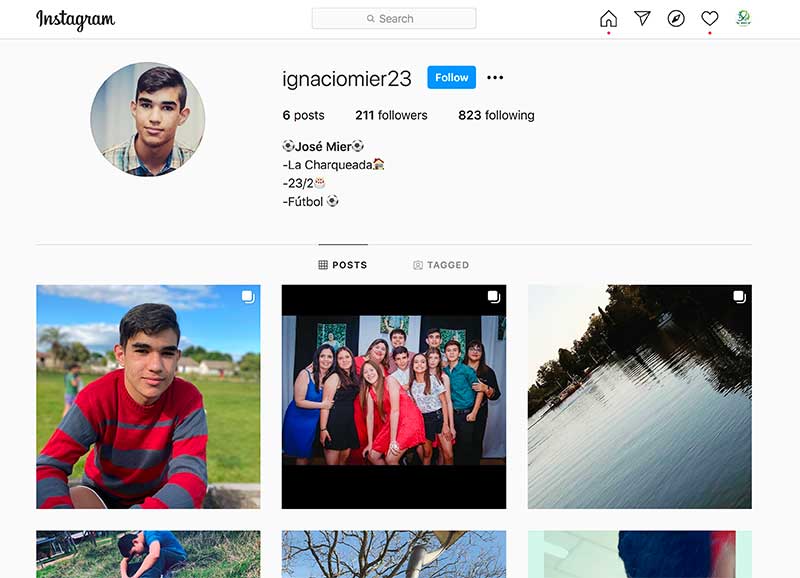 Searching for Jose Mier once more I took a different route. I’ve never searched Instagram before but that was one of the search results so I clicked on the link and found this young man who looks to be about 17 years old. I had to do a little bit of additional research find out where exactly he is located. He gives his location is simply La Charqueada so I did a little more research. It turns out La Charqueada is a small village in Uruguay, located on the Southern coast of their country.

I can see that he likes soccer and that his birthday is February 23. So I know this is a young man from Uruguay and I know the date of his birth. What was most interesting in the course of my research was finding out about La Charqueada. According to Wikipedia this is a small village of only 1400 residents. It was founded in 1914 but its population is decreased over the last century me. In 1908 there were a little over 4000 residents. In the following years, for most of the 20th Century, population dropped down to as few as 900. It since gained another five or six hundred. Still, it’s a very small area and it looks like the main claim to fame is tourism.

It’s located in a wooded area and very close to the water (Rio Cebollati) so there is the opportunity to partake of the natural beauty of the area: hiking, water sports, etc. It looks like a very interesting place to visit, but I wonder, with such a small population, what it’s like for young man who lives there. Of course there are other villages and towns nearby so I’m sure he gets out and has friends in other areas.

It also appears he goes by the name Ignacio sometimes. Perhaps that’s his real name and he just uses Jose has a nickname. Regardless I’m happy to find a young man named Jose Mier and in another country besides the United States, Mexico or Spain.

Young man, you probably do not realize that your fame has spread as far as Sun Valley California, but it has. Welcome to my list of famous Jose Miers.

Article Name
Young Jose Mier from Uruguay
Description
Jose MIer has found another person with the same name. This one is a young man from La Charqueada, Uruguay. La Charqueada is a village of only 1400 residents.
Author
Jose Mier
Publisher Name
jose-mier.com
Publisher Logo