Another Santander Connection - Jose Mier Around the World 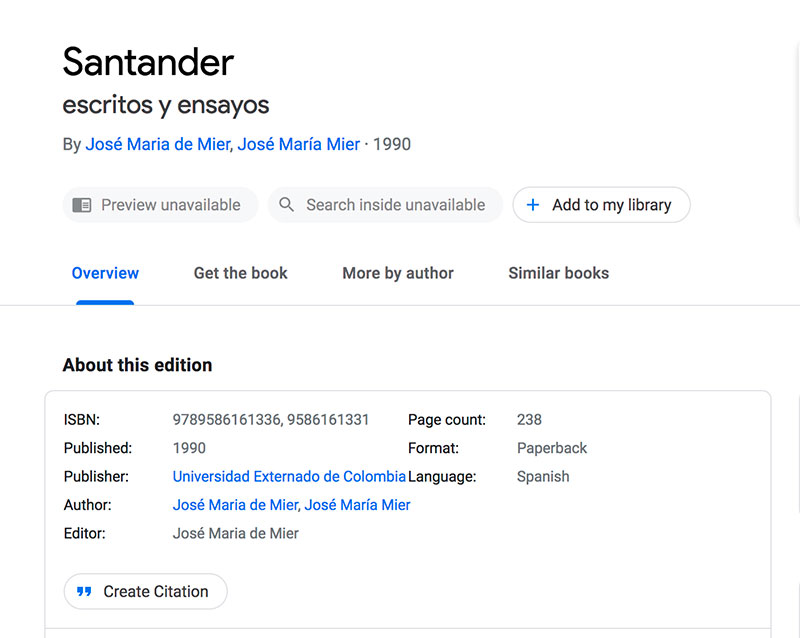 I found my 31st Jose Mier on Google Books. As I said before in previous posts, I’ve had a lot of success with Google Books and continue to use it as a research tool. As I dig deeper into the books results I find new and interesting books, authors and references that help me in my search.

The book I happened upon this time it’s called Santander. It caught my eye primarily because of all my references to the Santander province in Spain, the origin of the Meyer name. I’ve also made reference to Nuevo Santander in Mexico. That would become Tamale class, the current name for that area, and the home of see your dad Mier in that country. However, it’s obvious that the Spanish influence extended not only to Mexico but to other countries that fell under the influence of Spain after the conquest in the 16th century. One of those countries is Colombia and it too has a Santander Providence.

I originally thought there was a Mier/Santander connection in this book that related to Spain but it seems to be just a coincidence. The author of this book is named José Maria de Mier and I can only speculate weather his family goes back far enough where Miers from Spain participated in the colonization of Colombia and were responsible naming this area Santander. It’s a thought, anyway.

The book is fairly recent, having been published in 1990. It’s in the Spanish language so that prevents me from truly digging deeper into the contents of the book. Regardless I’m only interested in the authors name, another Jose de Mier to be able to add him to my list. He is Jose Mier number 31. For those like me who have never heard of this send tender area of Colombia I’m including a quote from Google that describes the area. You may find it of interest.

Santander is a north-central Colombian department in the Andes mountains. It’s characterized by river valleys and rugged terrain, including the craggy mountains of the Parque Nacional del Chicamocha. The park is known for its panoramic cable car across the Chichamocha River Canyon, plus a water park. The high-altitude town of Barichara is famed for its cobblestone streets and colonial architecture.