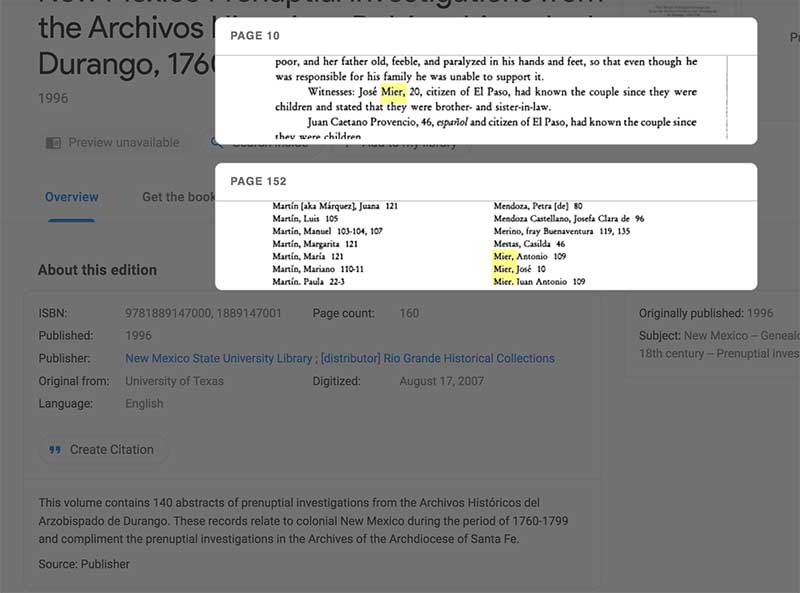 I find some interesting things in my searches for people named Jose Mier. The latest excerpt from a book on prenuptial investigations in New Mexico during the last half of the 18th-century reveals the getting married required a lot more than it does today.

From the infinitesimal information I was able to glean I can tell that the church needed to make sure the people who are getting married met certain requirements, thus an investigation was in order. One of the witnesses in just such an investigation was a person named Jose Mier. I don’t know much more about this person. I know only that he was witnessing a prenuptial investigation, that he was age 20 and that this investigation took place in the archdiocese of Santa Fe in New Mexico between the years 1760 and 1799.

This is a period of expansion for Spain which saw an expedition into California buy Junipero Serra in 1769. As an aside Serra would have passed very close, if not directly through my home of Sun Valley, California as he made his way north and founded the California missions. Similar activity I’m sure was taking place in New Mexico at the same time in Spain reach further north to claim the lands that are now the American southwest.

My Jose Mier finds are usually incredibly obscure and this one is no exception. But his name doesn’t appear in records and these records have been published and so I had him to my list.