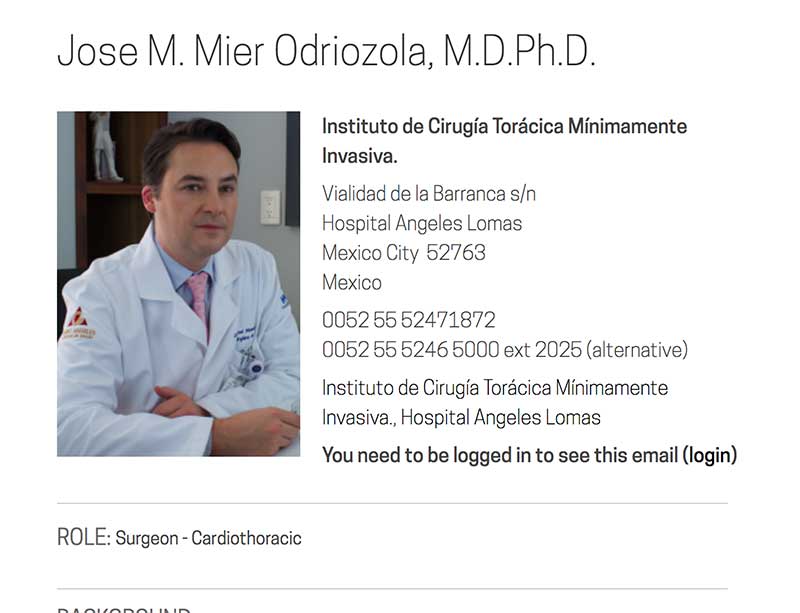 Jose Mier here with yet another celebrated Jose from around the world. We’ve had lots of Jose Miers from boxers to composers and more than a few doctors. Our latest addition is a thoracic surgeon from Mexico. Mexico City, to be exact. I’m always excited to see what other people with the same name as me are doing and their vocations are as varied as the countries they come from.

Our Dr. Jose Mier is Jose Manuel Mier Odriozola and he works at the Instituto de Cirugía Torácica Mínimamente Invasiva (translated: The Institute of Minimally Invasive Thoracic Surgery) in Mexico City. Unlike some Miers I have found there’s quite a bit of background information available about him—most likely because he’s a practicing physician and there’s usually a lot of info on schooling and experience.

He studied medicine at UNAM (which is the National Autonomous University of Mexico) and later studied thoracic surgery in Madrid. When I saw this at first glance I thought he might have been a Mier from Spain, but it looks like he’s from Mexico. Following the stint in Madrid he took a thoracic surgery course in Boston. That leads me to believe he speaks English and adds another layer of erudition to my latest Jose Mier. Furthermore he studied in Paris. Does he speak French as well? Quite a learned individual! He was on staff at a hospital in Spain until returning to Mexico where he currently practices.

This Jose Mier is on Video!

Just on a hunch I searched specifically for his name but for videos on Google and, lo and behold, he’s actually got a video on YouTube. He was interviewed by a television host on Mexican TV so this is a first for me in that I (and you) can actually see and hear one of my “famous” Jose Miers. The video is in Spanish so unless you speak that language it may not be of interest, but you can see he’s an accomplished surgeon even at a fairly young age.

The Institute website itself has an introductory video featuring Dr. Mier as well!

Thoracic surgery involves several parts of the body including the chest, lung and esophagus among others. The fact that this Jose’s surgery is supposed to be minimally invasive is heartening. The more often we can make surgery less invasive, the shorter the healing time so Dr. Jose M. Mier, I salute you and welcome you to the ever growing list of other Joses from around the world!