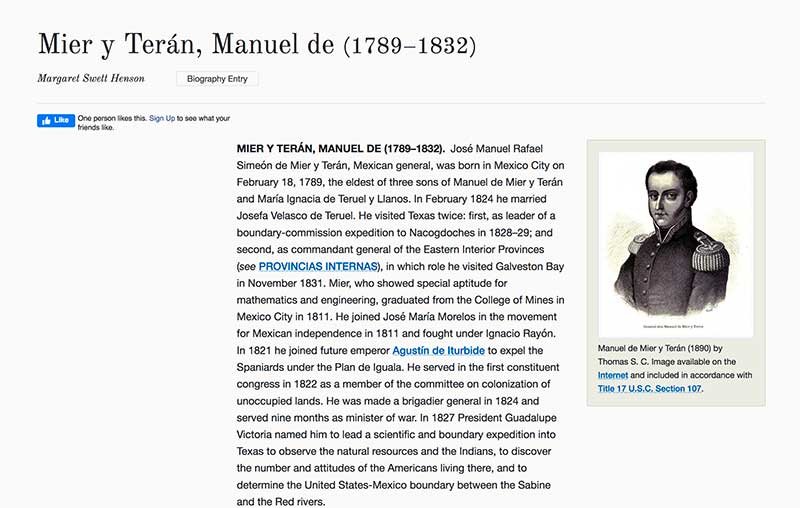 Jose Manuel de Meir y Teran is an interesting find. I happened upon quite by accident. Since it’s January 1 I did a search for “Jose Mier January 1.” Although there’s really nothing in the results that led me to this man, I hadn’t seen this person’s biography before.

Apparently he went by his second name, Manuel, but his given name and birth was José Manuel Rafael Simeón de Mier y Terán, which makes him an official Jose Mier. The listing I found on Google was from the Texas State Historical Society and the reason for this is obvious. During his career Mier was prominently involved in the struggles in Texas especially those at the end of his career where Texans were seeking independence from Mexico.

He was born in 1789 and became a general in the Mexican army. He was involved in Mexico’s fight for independence from Spain in the early 1800s and later was sent to Texas on an expedition to explore its natural resources as well as the Indian population there. At one point he served as Mexico’s minister of war.

When the Texans, which know included many immigrants from United States, begin to fight for independence from Mexico and had one battles such as the one Matamoros, Texas, Mier became depressed and despondent and ended up committing suicide, ironically behind Church. It was indeed a sad end to the life and career of Amman who had accomplished so much during his lifetime.

Regardless, this is another person named Jose Mier who I can add to my list. It is the first of 2021 and so begins my second year have my search for others who bear my name.